Meet our iconic electric cruiser and its trusty sidekick. With a retro frame, a powerful motor, and a versatile side basket attachment, Easy offers a whole lot of muscle in complete MOD style.

Delivery estimates are made in good faith, but are subject to delay due to government restriction, failure of our suppliers to deliver, fires, strikes, global pandemics, or other causes that are beyond our control.

Meet MOD Easy and its Side Basket

Don’t let the vintage frame fool you. Easy comes equipped with top of the line components built to last. Get your heart beating again and haul some extra cargo with this high-powered, head-turning e-bike and side basket combo.

Designed from the Past; Built for the Future

Inspired by World War II motorcycles, Easy captures history with its retro frame and iconic side basket. Our goal was to craft a machine that would turn your commutes into inspiring moments. Meet our iconic side basket. Designed specifically for the MOD Easy, the side basket offers a payload capacity of 120 lbs - so you can transport your extra cargo or even your furry friends. Strap on the goggles, cue the tunes and set off on your best adventure yet. The sidecar can be easily detached using 3 quick-release pins.

We partnered with industry leaders to develop an innovative system that is powerful, smart, and reliable. Easy delivers peak performance supporting speeds up to 28 MPH using a long-lasting geared-hub motor. The removable power pack is loaded with top of the line Samsung cells managed by an Advanced Digital Display.

Check out our smart display

Our smart display was designed to give you access to performance settings adjustments so your bike can be tailored to your specific riding style. Through the settings menu, you can control advanced settings like:

From the main menu, you will have a clear readout of the bike status and useful information like:

Fenders
Will keep you clean and dry

Sidecar Compatible
Optional sidecar which attaches to your Easy

Powerful LED Headlights
Illuminate the road ahead of you

Features
Do Anything, Go Anywhere

YES, we have the coolest side basket ever… but that’s just a bonus. Easy is rich with usable features for your everyday use. Front and rear fenders will keep you dry and clean and a rear rack that comes as standard allows you to load any cargo you need. Choose your destination; you’ll be surprised how Easy you’ll get there.

Style and comfort don’t usually go hand-in-hand, but with Easy, you can’t pull them apart. This MOD was designed with a unique geometry for full leg extension; and premium features that allow you to resize for maximum comfort and stability. If you can’t already tell, Easy ain’t nothin’ but a laid-back ride.

Maximizing comfort on and off the road

Adjusts to your perfect riding angle Easy features responsive hydraulic disc brakes that offer maximum control, and wide multi-terrain tires to keep you stable on or off the road. LED head and tail lights keep you visible from all angles, so you can focus on all that matters: piloting this classic ride.

Easy was built ready to resize for your optimal comfort and riding position. You can adjust the seat post and handlebar to fit your height in seconds. You’ll have full-leg extension and a relaxed upright seating position. Easy is a great fit for anyone 5’1″ (157.5 cm) to 6’7″ (206 cm). Here’s what you get:

We’re confident you’ll love your MOD once it’s delivered. If not, return or exchange it for free!

Flexible monthly installments for up to 36 months starting from 0% APR.

We offer free and fast shipping to the lower 48 states, delivered right to your doorstep 90% assembled.

Every MOD is built to last and is protected by our 5-year limited warranty for extra peace of mind.

Order Now
Chat with us
Talk with an expert

I love my bike and I use it everyday to take the dogs out. My larger dog running with us when the other 2 smaller dogs enjoying the ride.
A great buy !!! 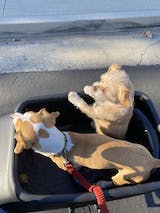 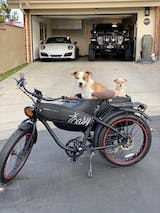 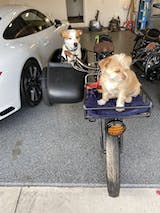 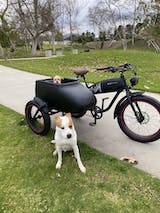 Bikes and dogs! That is how we roll. Thanks for the review and all of the great pictures. 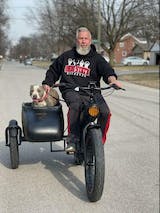 Thanks for the review and give Scarlett a belly rub for us.

Great bike… the wait was so worth it. Get so may looks with the side car. MoJo loves it :) there is a definite learning curve to ride with the side car. Power is great goes right up the hills in the neighborhood no problem. Can’t wait for the weather to get warmer and take it out on the silver comet trail. 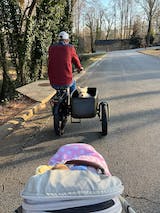 Warmer weather is on the way, hope you enjoy it. Thank you for your kind words.

I was doing my best to refrain from writing a review but since you continually badger me with emails requesting it and there is no way to unsubscribe maybe you’ll stop if I do.

Missing parts, parts that aren’t called out in the directions and generally poor fabrication have led to the sidecar being the worst purchase I’ve likely ever made. Four weeks later and it still is not serviceable. I’ve even engaged a local metal fabricator to see if they could make something to salvage this. Take it to a bike shop you say? Tried that, got a response of “wow we have no idea how to help”.

The bike is fine, if not for the sidecar we would have gone another route, which makes this even more frustrating. Well that and the fact you continue to send emails asking for reviews and welcoming me to the “Mod squad”. My blood boils just seeing the sidecar in pieces in my garage, so the constant emails aren’t making this any better.

Hi Thomas,
Thank you for the review, No matter the outcome its extremely important for us to know your thoughts. It's the only way for us to fix the problem for you and all future customers.
I sincerely apologize for the inconvenience with the Sidecar, but we stand behind the quality of our products, our support team with be in touch.
-Mike

R
Rachel N. (Torrance, CA, US)
Not for single women

Trying to hook up the side boat is exhausting. It is heavy. 7 day trial not long enough as I still haven’t been able to hook this up. Mechanical error. Went dead on me mid-ride. Not fun to ride a super heavy bike back with no power. This is after only 40 total miles on it! I so want to return this product! Super disappointing in everything from set up on. Biggest waste of money ever.

Yes, the sidecar is not light and does take a bit of practice and patience at first to master the setup. I'm sorry your bike wasn't working property. I totally understand your frustration. Our support team will help you with everything and will find a solution to make sure you are happy.
-Mike